Posted on September 1, 2013 by Multiple Viewpoints 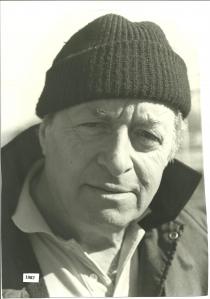 The only unpleasant experience I have had as a writing instructor was when there were medical doctors in the class. The subjects they wrote about were usually terrifying. X-ray radiation and hereditary alteration, rheumatoid arthritis, cystic fibrosis, bladder cancer, pulmonary embolism, emphysema, hernia. From the manner in which they wrote of these bodily horrors, there was no way to stop them from happening to me. My next breath might be my last. A slight cramp the beginning of the deadly angina.

These medical-people-students force me to recall when I was younger and decided to become intelligent, and deep. I began reading psychiatric case histories and books on psychoanalysis. In a week’s time I became an emotional and mental paraplegic. I contained all the horrible dimensions of neurosis and insanity. There was a repulsive psychological scum oozing from my persona, causing people to reject me.

In fear that my homicidal, suicidal, and degenerate tendencies might become manifest, I had to stop reading such books. The same mind-fright happens when any doctor desires to write a novel and seeks me out as his instructor. I find all the symptoms they write about in myself. They make me feel like a highly charged plague.

When I teach writing, I am loud, aggressive, declarative, and sometimes table pounding. I never direct my comments at the student, personally. I am not trying to humiliate or debase a student. To me, people are precious–but what they write must be forthrightly appraised. I am relentlessly objective and ruthlessly uncompromising. Eventually, most students get used to me, but not the medical doctors. They are ultra-sensitive: as though their nerve endings were peeled.

They take personal offense and devise their own methods of getting back at me. Some stare at particular areas of my body in such a way that I know they have seen an incurable, fatal disease.

One doctor kept looking at my eyes as though examining them for what disease was inside my head. Then he would glance away, sigh in helplessness, and sorrow. It was impossible for me to teach that class through my choked back tears. I knew the doctor had studied my brain symptoms. That he had seen an exotic lump with barbed tendrils gradually strangling my speinus capitis or obliquus superior.

I hate it when I am forced to ask a doctor a question like: “When describing a naked foot, why do you use terms like adductor tranversus? Why not just say a toe?” And before he answers, he puts on his thick-lensed glasses. Does looking at me with his glasses on improve his hearing? Or is it the sound of my voice that aroused his interest? Did he hear a wheeze, a rattle, the slosh of a torn gland bumping against a loose bone–is he ready to doom me to a hospital?

I remember a doctor coming up to me after class, to shake my hand. Earlier, I had told him, “Writing is not put down the way you scribble a poorly considered and usually incomprehensible prescription.” He shook my hand. I thought he had forgiven me for being truthful. But there was no forgiveness in him. His eyes were sly and mean.

He had grasped my hand to check my temperature. I sensed he diagnosed my skin was abnormally dry, my fingers tremored as though with advanced palsy. I noticed him studying the warts, wrinkles, veins, and liver spots I had never noticed before. I quickly pulled my hand from his, wanting to be alone, so I could faint.

Maybe this fright they stir in me has biased me to doctors. They’re always complaining about the high cost of malpractice insurance while jiggling the keys of the four Mercedes they own. They swallow their words when they speak–as if whispering to their nurse, “Give him some pills–he’s dying.”

When doctors write a sex scene you don’t get fun and games happening in the shadows. You read descriptions of corpora cavernosa and cutaneous pouches and delete ovarian vessels. Their sexual participants achieve delights in names that would frighten the normal human being out of bed. Their people never kiss, they trade bacteria. They are as passionate as drugged beetles.

The annoying aspect of instructing doctors on how to write is that some of them are genuinely talented writers. Since I can’t keep them out of my classes, I suppose I should redirect my complaints and focus on lawyers. They are even more difficult to instruct. They have no sense of the common American language. They listen carefully to your criticisms not to find out the flaws of their writing but for any cause for liable. They are always taking notes and looking at their wristwatches to record when you said what you said.

©2013 the estate of Leonard Bishop